The Land Breeze and the Sea Breeze is a common phenomenon observed in the coastal areas.

In the coastal areas, the wind blows from the sea to the land during the day.

This is called sea breeze.

This breeze occurs most often in the spring and summer months

because of the greater temperature differences between the ocean and nearby land,

particularly in the afternoon when the land is at maximum heating from the sun.

During the day the land gets heated up more than the water in the sea.

The sun heats up both the ocean surface and the land.

Water  absorbs  the energy of  the sun. The land absorbs much of the sun’s energy as well.

However, water heats up much more slowly than land and so the air above the land will be warmer

compared to the air over the ocean.

The air above the land is warmer. It rises up. Cool air from the sea blows to take its place. 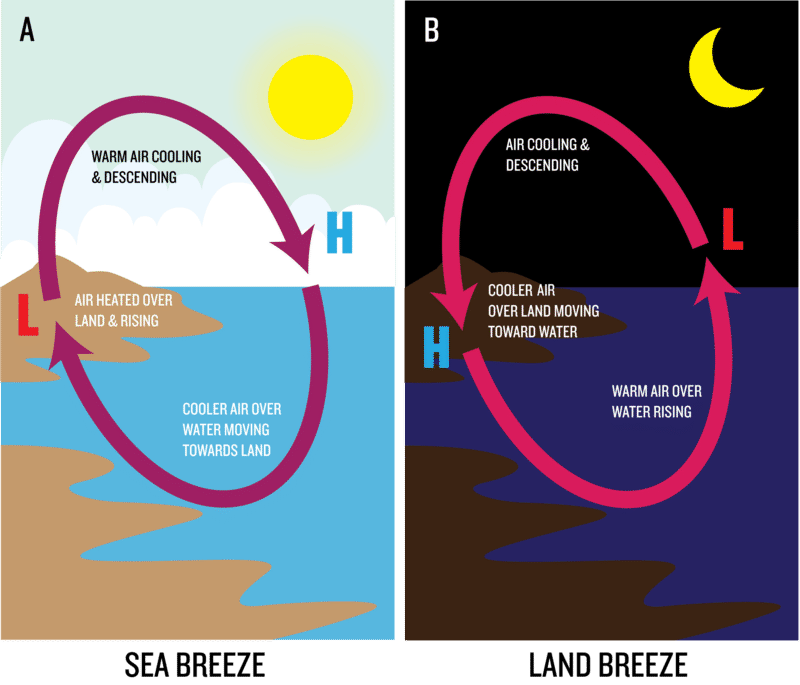 During the night, the wind blows from the land to the sea.

This is called land breeze.

At night, land cools faster than water. So the water is warmer than the land. The warm air above water rises up. The cool air over land rushes to take its place. Thus land breeze blows during the night.