How do Insects Hear?

Insects are very amusing though they look scary. But they are our ancestors.

Insects don’t have defined ears like ours, they have ear like structures which are way different from ours. They are called tympanum or tympanal organ. This functions like an ear everywhere. The insect ears are 10 times or more smaller than a human ear. 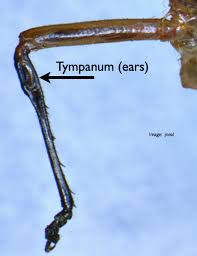 Ears like structures are found on different parts of the body in many different insects.  Grasshopper’s ears are on the sides of the abdomen, underneath the wings. And other insects have ears in other place. For the crickets the ear like structure is present in the legs. Hearing has evolved at least 20 times in insects, leading to ears in an astonishing number of different locations.

How does it work?

These ears allow the insects to detect ultrasonic signals they have been developed this ears in the roll of generations due to evolution.

The hearing of the insect will be highly amplified. The researchers found that a single sound actually arrives at ear twice, at different times and with different amplitudes and in the external and internal paths. This together improves their ability to locate the source of the sound and react accordingly. This significant new discovery helps to explain how these nocturnal insects use their advanced hearing systems to successfully locate their mating partners in the dark jungle. This type of the ear is a pressure difference receiver type.

The ancestral insects which lived 200 million years ago were not having any fossil evidence for ultrasonic hearing. This proves that the ear was a development through the phase of the evolution.

They have spiral cavity in the inner, which produces nerve impulses in response to sound vibrations.

Now this explains how the insect moves away as we tap the surface near it. The sound gets amplified so much that they will be able to sense the source sound. It is an easy way to escape danger.

What is the use of studying this?

Well this would be the question in your heads. The thing is that the information on this can be used to make better microphones hearing aids and other sound systems to give a better amplified result.

Modern microphones, such as those used in hearing aids, and transducers such as ultrasound scanners, are remarkably sensitive. However, they still struggle to deal with issues such as background noise, which may need to be removed by downstream digital processing, or identifying the direction from which a sound originates. this study can facilitate in correcting the errors. this invention will be a great break through.